Born 1951 in Sydney, Australia where he mostly lived until 1980 (except for a short two year stint in California in the early 1960s). He became interested in astrology in 1972, and consequently studied, researched and erratically practiced for many years.

In 1987, he came up with the inspiration for his research into the astrological ages and commenced publishing articles on the subject since 1994. It all occurred one winter’s afternoon while lying in the sun hanging out with some friends.  His thoughts (oddly) turned to the issue of the cusp of the astrological ages.  Quickly he realized that it was absolutely absurd that the Age of Aquarius could not begin at a specific time and date in the same way that practically everything else in astrology conforms.

It was a long and at times torturous path from inception to publication and he spent some years doing no research at all.  From 2000 onward, he became more focused upon his astrological research into the astrological ages and deepened his study of Vedic astrology.  Finally in 2011 he published his first book on the astrological ages including the age-decans.  (see http://www.macro-astrology.com). Terry is currently writing his second book specifically orientated upon the sub-ages and sub-age decans of the astrological ages.

He is a member of the Federation of Australian Astrologers and the Astrology Association of Great Britain. 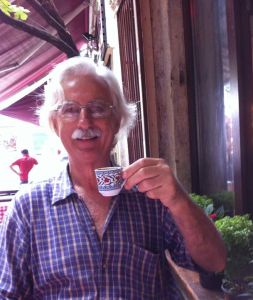 Some Insights from Terry MacKinnell

The most humorous aspect of my research was that originally I thought other astrologers would steal my idea. I quickly discovered that not only was no one interested in stealing my ideas, very very few astrologers even wanted to know what I had to say about the astrological ages. My research on the astrological ages has uncovered many inconsistencies and problems with the standard model plus I have experienced many epiphanies. All astrologers experience epiphanies as they discover astrology, but there is something special about being the first to experience an epiphany in an area no one has gone before (or at least in modern times). It’s like being the Christopher Columbus of the astrological ages.

The standard model of the astrological ages is based on the approach of an ancient Greek astronomer called Hipparchus (there is a satellite named after him).  However while other ancient intellectuals such as Aristotle, Galen, Ptolemy etc have had their theories examined and in most cases rejected from the time of the Scientific Revolution onward, the same has not applied to Hipparchus.  We have rejected the Flat Earth Theory and the earth at the center of-the-universe but many astrologers cling to the unverified ancient approach to the astrological ages which like most other ancient theories, is either incorrect or faulty.

Hipparchus unwittingly made a fundamental error in his astronomical approach to the astrological ages.  I certainly did not set out to undermine his authority in this field, but over the course of my lengthy research it has become obvious that Hipparchus’ fundamental error has delayed the appearance of each astrological age by approximately half an age (i.e. 1075 years).  So while most astrologers predict the Age of Aquarius arriving around 2600 AD, my revised methodology indicates that the Aquarian age arrived in the 15th century, aligned to the Renaissance, the beginning of the Scientific Revolution and the arrival of Modernity (look it up in Wikipedia if you do not believe me).

Historians and a plethora of recent books indicate that the modern world arrived around 500 years ago.  The modern world IS the Age of Aquarius.  There is a conceptual revulsion by many people to the idea that the Aquarian age arrived in the 15th century and this is certainly not limited to astrologers.  This is because there is an urban myth that the Age of Aquarius will bring peace, awareness and a veritable Garden of Eden to the world.  This is merely millennialism in a different form. The new revised timings for the astrological ages tally with Big Picture historians such as John C Landon, author of “World History and the Eonic Effect”.

For the same reason people believed 2012 would bring the end of the world or some other fantasy, and the year 2000 was supposed to indicate disasters due to all the computers not recognizing date from 2000 onward,  many people look for doomsday or paradise due to their dissatisfaction with the world or lack of inner fulfillment.  It is a bit unsettling if paradise is expected with the arrival of the Age of Aquarius and the Age of Aquarius arrived over 500 years ago.  Should unsubstantiated concepts and dreams over rule painstaking research?  This is the state of the astrological ages today.

The reason why there is so much confusion about the Astrological Ages and the start of the Age of Aquarius is that the standard model is incorrect.  Because it is incorrect people put bandages on it, then bandages on the bandages to try and cover up the festering inconsistencies.  All these bandages makes a dog’s breakfast of the astrological ages.  Anyone can say anything about the Age of Aquarius, and they do, but this does not make their statements true.

6 thoughts on “About Terry MacKinnell”